Is the Future of IR Inside or Outside the Mask?

Let’s be honest: we all kind of hate computer screens.

The glowing hurts our eyes, the blue light messes with our circadian rhythms, and sitting down for eight hours is the health equivalent of smoking a pack a day (or maybe it isn’t, depending on who’s funding the study).

Immersive reality is supposed to change all that

We’re supposed to be able to sit in a comfortable chair, or lie down on the ground staring up at the ceiling (which Mack would appreciate, given his propensity for lying under his desk and balancing his laptop on his stomach). We’re supposed to type with our fingers on the ground or a table or whatever surface we please, never mind the need for a keyboard (we could type in the air but it turns out it’s really hard to type if your fingers don’t meet resistance).

We’re supposed to spread information through the air like in that movie I refuse to name because it’s the only one anyone ever brings up when they’re talking about immersive technology even though plenty of things have come out since then that use the same concept. 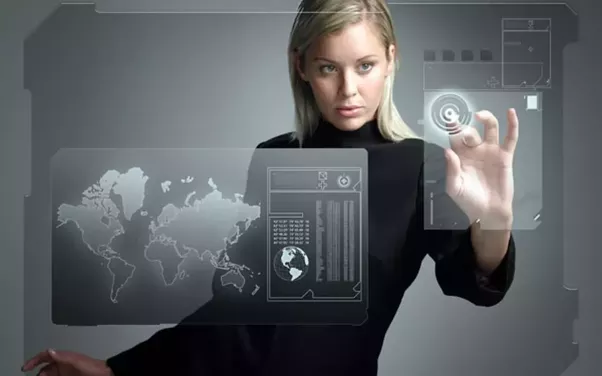 But what about immersive reality that doesn’t focus on the individual?

Almost as oft-quoted as Minority Report is, of course, the Holodeck. Pretty much every child of the 80s is desperate for a 10x10 magic room that can transform into any area you please (companion guides not included; how do they never run into walls?).

Real world examples are out there.

Because of the collaboration factor, these displays are particularly popular with industry clients. They’re being used for health care, manufacturing, entertainment, and even retail.

To mask or not to mask?

Is this a question of which technology will win? Or rather is it an instance of different use cases requiring different technology? When laptops first came out it seemed like they would never replace desktops; but now a laptop can do anything a desktop can do (granted it’s still more expensive to get more robust features in a laptop).

On the other hand, cell phones seemed poised to kill landlines, but their weaker signal strengths means old-fashioned handsets are lingering much longer than most people would have imagined. Radio never killed television, but our cell phones sure did demolish 95% of calculators (students in exams is probably the one exception).

Masks are inherently uncomfortable, but a shared reality is inherently unprivate. For now, it seems likely that the two technological forks will continue to be inherently connected at the handle, to take the metaphor too far.